No more than once a year do I write about football. I consider myself fully unqualified to make insightful comments about the game itself, so I leave that to those who at the start of the season were certain that Chelsea would be champions and Leicester City relegated. The 2015-2016 Premier League left them with lots to write about, but we need to talk about a match that is being played today, in Hull.

In this evening’s Championship play-off semi-final, Hull City defends a 3-0 lead over Derby County. People who regularly write about football have assured me that Derby are unlikely to overturn this, in which case Hull would proceed to the play-off final – a match that sees the winner grab the last ticket to the 2016-2017 Premier League. Sheffield Wednesday will be the other team in that final; they qualified yesterday.

Should things go as widely expected – not much of a guarantee these days – then the play-off final will be a kind of derby, as both teams are based in the Yorkshire and the Humber region. This circumstance is unlikely to trouble any of the fans supporting their teams at Wembley on the 28th of May, but whoever wins will be the sole team representing their region at the top flight of English football.

A little over a year ago, Hull City seemed well-placed to prolong their stay in the Premier League, but an unexpected (there’s a theme here) renaissance of Leicester City and a typical narrow escape by Sunderland saw them relegated on the final day of the season, ruining the scenario I had so carefully devised. My wish for the Premier League to include teams from all English regions plus Wales had almost been realised, but then Yorkshire and the Humber failed to play ball.

Despite the Yorkshire fiasco, the total number of regions represented in this year’s competition was a record-breaking nine, up one from the year before and more than double the 2010-2011 region count. Somehow, all nine regions managed to keep at least one of their teams up – hats off to Bournemouth – and with Burnley and Middlesbrough taking the automatic promotion spots, Yorkshire and the Humber looked at risk of being the only absentee for a second consecutive season.

Now, however, their teams appear to dominate the play-offs, and in some 45 minutes the prospect of an all-region Premier League may have materialised. For the first time since its establishment in 1992! How very fitting that it would be Hull City delivering it, after their very unfortunate relegation last year. And still it may not be them getting promoted. I’m easy about that though, as long as they win tonight to write football geography history.

Live update: as I was writing, the match got underway and currently Hull City are 0-2 down, Derby County needing only one more goal to take the match to extra time. Come on Hull, don’t do this to me and my regionalist dream again!

Post-match update: Derby County didn’t manage a third and Hull City are through! There will be teams from all regions in the 2016-2017 Premier League.

Come on Bournemouth! And Derby. Or Leicester.

When in 2010 Hull City and Portsmouth were relegated from the FA Premier League it meant that two English regions lost their only team in the top flight.

Since a similar fate had struck other regions in the previous years, the season 2010-11 became a contest between teams from four regions only: two from the North East, five from both the West Midlands and Greater London and a whopping eight from the North West. It must have been a cheap and easy season for some supporters – those of Wigan Athletic had seven away matches within cycling distance.

During its first decade, the Premier League (formed in 1992) consistently included clubs from seven or eight regions. The number fell to six in 2002, fluctuated between seven and five in subsequent seasons, until the 2010 dip that marked the first and only time in the league’s history that the majority of regions were unrepresented. 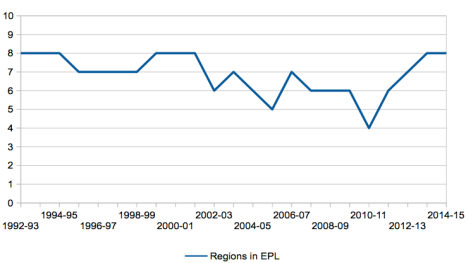 Number of regions represented in Premier League by season

Then, Norwich City and Swansea City came to the rescue and got themselves promoted from the Championship. This was remarkable, as the East of England had been deprived of Premier League football for four years, and no team from Wales had ever achieved the ultimate promotion.

Sure enough, in the next few years clubs from other regions followed their example and currently the number of regions with Premier League football is back where it once started, at eight.

Yet, that is still eight out of a possible ten – Wales plus the nine English regions. Interestingly and unexpectedly, a scenario for full regional representation is currently presenting itself. Here’s what it looks like.

The two regions currently without a club competing in the Premier League are the East of England (Norwich City sadly went down last year) and the South West. The latter has been without a top level contender since 1994, when Swindon Town were relegated. Amazingly, with seven rounds to go, Bournemouth, the only team from the South West in the Championship, top the table, a position that would grant them their first ever promotion to the Premier League. With Norwich City, Watford, and Ipswich Town all in the top six, the East of England has three clubs well-placed for promotion.

In a way, the promotion of sides from the South West and the East of England is the easy part of the scenario. The difficult bit is getting the East Midlands to cooperate. Their only Premier League team, Leicester City, are hopelessly glued to the bottom of the table and have nine matches left to close a seven-point gap to safe 17th. In the likely case of a Leicester City relegation, the Championship would need to provide a regional replacement to secure a ten-region Premier League season in 2015-16.

Nottingham Forest have failed to keep promotion spots within reach, but Derby County are still hanging on, currently occupying 5th, which would qualify them for promotion play-offs.

So there’s the scenario in full: Bournemouth and one of the Eastern clubs to take the two top spots in this season’s Championship, then either Leicester to stay up or Derby to win the play-offs. Oh, and we can’t have Hull City go down, that would spoil everything. If, like me, you would quite like to see an all-region Premier League for the first time in its history, now you know what to do. Cheer for Bournemouth, and for Derby (or Leicester), and for Norwich (or Ipswich or Watford, but not for all of them), and a little bit for Hull. Easy!